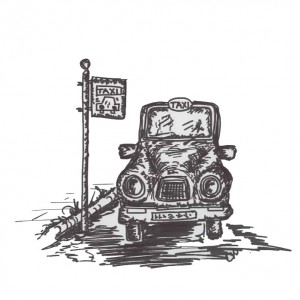 A familiar sight on many a London street

And along with your journey, oh…the banter you’ll get!

He’ll tell you some stories of old; some brand new,

Opinions on headlines, and he’ll ask about you.

You’ll find he’s a wordsmith and boy…can he talk!

But I tell you it’s worth it; beats trying to walk.

Those miles around sights are exhausting it’s true,

But jump in a black cab, and he’ll bring them to you.

You’ll treasure these moments of chatter and awe

As you take in some extras, he’s showing you more

Like the Tower Bridge gracefully from Thames hovering above

Want a photo? He’ll oblige, pass some silver for love.

As it teeters and glistens against grey and blue sky.

Buckingham Palace? “No problem there pal,”

As he tells you of Hyde Park, he drives down the Mall.

A show maybe later? Then he’ll show you where.

Each trip, a new cabbie brings something to see.

Each area different, each with its own glow.

How much I’d have missed, glad I travelled this way

So cab drivers I salute you, thanks for all that you say.

Sorry, no Tweets were found.